A Probable History of the Golden Family
of Newberry, South Carolina Since 1761
Updated 2022.11.11

The individuals below may appear in your DNA matches.

Among their shared DNA matches are the appearance of Barbara Goulden and John Raines, with Raines leading to the Rainey and Shands family [1]There is at least one DNA match with a Shands descendent that did not go through the Rainey family. .

There are no known genealogic kinships of Virginia Gouldmans with these individuals, but direct interaction existed between William Rainey and Francis Gouldman [2]Francis Gouldman born c1658, died at some time in 1716. The Records of Essex County, Clerk’s Office, Tappahannock, Virginia. Deeds, Wills etc., No. 14. page 680. His last will and testament was … Continue reading. By 1715,  Francis was ill or dying and putting his affairs in order. Francis was also putting the affairs of his brother Edward Gouldman‘s estate in order. [3]For whatever reason, Edward Gouldman did not put or allow for future control of his estate by his wife Martha “Patsy” Tomlin Gouldman (c1680-1721). Francis Gouldman likewise bypassed … Continue reading

Items below are still in edit mode as of November 2022. All notes are accurate but more precision needed in explaining relationship + footnotes need to be added.

Barbara Goulden is virtually mythical in our Golden family. The only documentary proof that she ever existed is a 1942 DAR Application (Approved). Despite no record of her existing, there are no shortage of DNA matches with descendants of the Raines family that she married into. The Raines also went by the name of ‘Rainey’. Gouldmans associate with members of this very Raines and Rainey family during the very early 1700s. I have a conspiracy theory that I will share with you one day about Francis Gouldman, brother to Edward Gouldman, and a business deal that he made in 1715 with William Rainey.

———- Barbara Goulden is near ‘mythical’ because there is absolutely no record of her. How her name came to be on the 1942 DAR application is straightforward (a Raines family member put it there), but the Raines themselves do not have any known written record of her. That said, there are dozens of DNA matches between our families and all paths lead back to the claimed marriage of Barbara Goulden, born c1720 in the Caroline/Essex County area and just down the road from the Gouldmans.
———- Raines family genealogies claim that Barbara Goulden died in 1794 at Randolph County, NC. No record for that either — YET, the Virginia Raines that moved to Randolph County NC are extremely well documented for their Revolutionary War service, which began in Virginia. Handwritten legal declarations exist which provide beaucoup information about the Virginia Raines line.

A male Virginia Gouldman has a DNA match with living English descendants of William Goulden of Yorkshire, England, born 1796. William’s children: one would immigrate to Australia, one to Massachusetts and the others remained in England. They have a very well developed genealogy for each of the descendant lines. Other than DNA, there is no known relationship between William Goulden of Yorkshire, England and the Virginia Gouldmans — but DNA says that there is kinship of some kind. 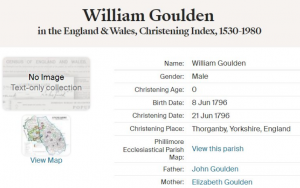 ©2022 William Golden, Norfolk1956@gmail.com // Material may be shared without requesting permission and with appropriate attribution: A Probable History of the Golden Family of Newberry, South Carolina Since 1761, compiled by William Golden ©2022