A Probable History of the Golden Family
of Newberry, South Carolina Since 1761

Parents: William Golden presumed to be father, and 1810 census suggests ‘Nellie’ or ‘Nelly’ Golden as mother. Nellie may have been an aunt, and sister to William Golden.

Spouse: Ruth Sheehan, c1774, South Carolina. Parents unknown. Death: after 14 Jun 1860, probably at home, Bloodworth District, Wilkinson, Georgia. Some genealogies indicate that Isaac and Ruth married about 1802 — there is no record for this. The 1802 date was probably chosen by a family historian to explain the pre-1810 claimed births of some Golden children.

? Did Isaac Golden have a wife before Ruth? Quite possibly yes. Depending upon the genealogy, Isaac has children born between 1804-1812 and then there is a later round of at least four children born between 1828-1835. It is not uncommon for a child to be born late in a marriage. It is much less common for there to be no children born for 14 years and then suddenly four more come along every 2-3 years. This latter group of children born to Isaac and Ruth may indicate that Ruth Sheehan was a second wife to Isaac.

Military: … There is no known military service, although some genealogies claim War of 1812 service. Our Isaac Golden was living in South Carolina in 1812 and 1813, having just acquired new land in Anderson, SC during summer of 1812. An Isaac Golden did serve in the War of 1812 in the Georgia Militia with Captain John Broadnax (aka Capt. J. H. Broadnase) militia detachment. [3]Broadnax’s detachment was incorporated into the 1st Regiment, Georgia Militia under Brigadier General Jephtha Vining Harris. Harris entered military served in 1812, and served until 1845. Came … Continue reading

? Could Isaac Golden of South Carolina have decided to join the Georgia Militia? Sure. Anderson, South Carolina was to the north and within 75 miles of the three counties making up the 1st Militia Brigade, Georgia (Elbert, Lincoln and Wilkes counties). What would have been his incentive? He had a wife with a newborn and small children at home. There was no promise of any reward or financial incentive for him to cross into Georgia and join the militia. It would be some years before War of 1812 service was recognized.

In 1820 and 1821, Georgia opened up a Land Grant Lottery for those that served AND WERE Georgia residents since 1803 — this residency requirement would have excluded our Isaac Golden, b1784. [4]SUMMARY OF GEORGIA LAND GRANT AND LAND LOTTERY RECORDS, by Robert S. Davis, Wallace State College, Hanceville, Alabama, 2017.

Working Notes: Yes, but not yet organized online.

~~~ There appear to be two Isaac Goldens of the same approximate age living in the same general region of Georgia and Pendleton District of South Carolina. One may be Isaac Golding, a son of Richard Golding (1744-1788) and Susanna Wilmoth (1744 VA – 1837 SC) who lived in the Abbeville and Laurens area, South Carolina. [6]Some of their children actually lived just a few miles away from our Goldens. These Goldings are often identified in documents as Goldens (see 1830, 1840 census for Newberry, South Carolina. Richard … Continue reading

~~~ Would have been six (6) years old. Our Golden families are not known to be in any 1790 census record, although other legal records indicate that they lived in the Newberry, South Carolina area.

~~~ Isaac Golden would have been approximately age 16 in 1800. Since the census divided children by ages 10-15 and 16-25, he could be either age 15 or 16 since the census usually occured during summer. There is a single male age 10-15 in the William Goulden (Golden) household in Edgefield District. There is also a single male age 1-10 years old; brother Abraham Golden was born c1790. [7]1800; Census Place: Edgefield, South Carolina; Series: M32; Roll: 47; Page: 177; Image: 343; Family History Library Film: 181422 No specific locations are given in this census as to approximately where a family lived. The census is named and collected information for ‘Second Census, 1800, Population, S.C., Edgefield’ … the census was for the entire district which included numerous modern counties formerly associated with the older Ninety Six District, and included Newberry County [8]See 1794 map of South Carolina which draws boundary lines for Edgefield equating to prior Ninety Six District lines: View Map …

~~~ 1812, War of 1812: An Isaac Golden served in the War of 1812, with service in the company of Capt John Broadnax (Brodnax),  2nd Georgia Militia Regiment. This is probably not our Isaac Golden. as he was living in Anderson County, South Carolina during 1812-1813, having newly purchased land there in summer of 1812.[9] Fold3.com, Index to Compiled Service Records of Volunteer Soldiers Who Served During the War of 1812 1812 … and … USGenWeb page: http://sites.rootsweb.com/~gataylor/regim.htm

~~~~~~ Our Isaac Golden was in South Carolina, preparing to move his family to the Anderson, Anderson County area. See land plat survey of 13 Aug 1812 below. 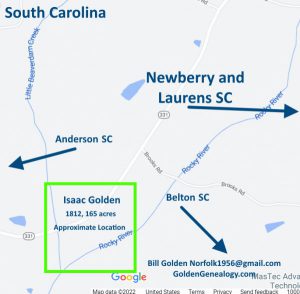 ©2023 William Golden, Norfolk1956@gmail.com // Material may be shared without requesting permission and with appropriate attribution: A Probable History of the Golden Family of Newberry, South Carolina Since 1761, by William Golden