A Probable History of the Golden Family
of Newberry, South Carolina Since 1761
Updated 2022.12.31

There are no documents that at any point discuss William’s specific age at any time. Census records placed people within year brackets. The ability to sign a contract or to conduct legal transactions was age 21+.

~~~ Possible children pre-Revolutionary War service. Some or all could also be children of William’s father Thomas. Samuel Golden and Thomas W. Golden male descendants are yDNA-tested and are our Golden family one way or another.

~~~Post-Revolutionary War children. 1790, 1800 and 1810 census does not provide names but there is room for little doubt that these Goldens are referenced in census reports. Other confirmatory information will be discussed in the profile for each. All male lines are yDNA-tested.

~~~ 1767 Oct 7: … Thomas Perry (Parry) receives land grant for 100 acres that sits on the northern boundary of the 200 acres granted to our Thomas Golden. Kinship of Thomas Perry to our grandfather William Nathan Perry (c1748) has not been confirmed. [8]Like many genealogies for the period, there were few records naming relationships. We do not know the parentage of our grandfather William Nathan Perry, which could have been Thomas Perry. … Continue reading 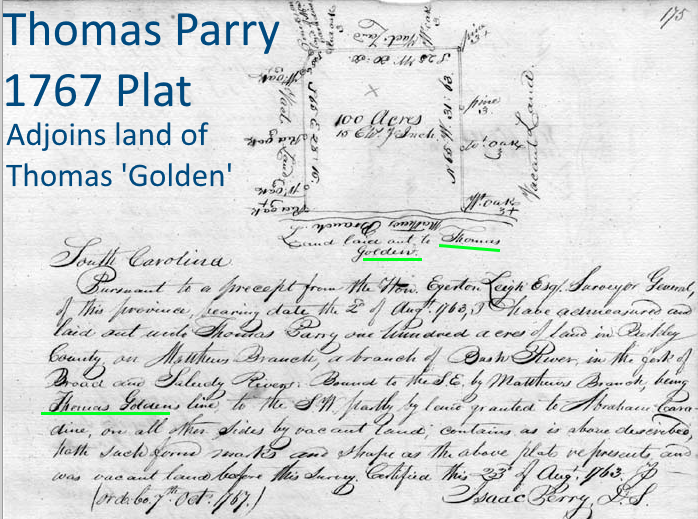 ~~~ 1777-1780: … Served in Dutch Fork Royalist Militia Regiment under command of Major Daniel Clary, serving within the company of second cousin commanded by Vachel Clary.[10]Post war relationship: Vachel Clary is 2nd cousin 1x removed of daughter-in-law (Rachel Isabella Morgan married to William’s son Nathaniel Greene Golden) of William Golden. Pay records indicate service from 1777-1780. ‘Dutch Fork‘ is the greater Newberry area and today is comprised of the counties of Lexington, Newberry, and Richland. After the 1780 Fall of Charleston, William served in the rebel regiment of Colonel Philemon Waters, a neighbor to our Goldens. Colonel Waters was an active recruiter of loyalists to switch sides without forcing them to serve: William Goulding is listed on a final payroll settlement document of 2 Apr 1786 for militia duty since the Fall of Charleston (May 1780). View this link for a much larger discussion of Revolutionary War service by William.

~~~ 1780 Aug 19: Battle of Musgrove Mill. The loyalist troops responsible for securing Musgrove Mill was assigned to Colonel Daniel Clary, Dutch Fork Militia Regiment, under charge of  a Major Fraser. Revolutionary troops were able to overcome the defense prepared by the Dutch Fork troops, a number being killed and captured. [12]Colonial and Revolutionary History of Upper South Carolina, by John Belton O’Neall Landrum, Jan 1897 · Shannon, printers. Pages 178-179. … Pay records show that William Golden served through 13 December 1780, four months beyond the Battle of Musgrove Mill, so obviously he was not among those captured. William may also have not been at Musgrove Mill. Clary’s troops under Colonel John H. Cruger were at this moment responsible for the defense of the garrison of Ninety Six.  [13]Pay records for Loyalists in the Southern Campaign, Vol I, Murtie June Clark, 1981, pg 229.

~~~ 1785: … An Indenture of Lease and Release from Frederick Gray to John Howell was proved by the oaths of Adam Taylor & William Golden witnesses thereto and ordered o be recorded. [14]Newberry County, South Carolina, Minutes of the County Court, 1785-1798, by the Rev. Silas Emmett Lucas, Jr, 1977, Southern Historical Press, Easley, South Carolina /B/

~~~ 1792: Supposedly William Golden bought property within Edgefield District, South Carolina. Can find no record of this.

©2022 William Golden, Norfolk1956@gmail.com // Material may be shared without requesting permission and with appropriate attribution: A Probable History of the Golden Family of Newberry, South Carolina Since 1761, compiled by William Golden ©2022