A Probable History of the Golden Family
of Newberry, South Carolina Since 1761
Updated 2023.01.17

Autosomal DNA (atDNA) is the combined DNA inherited from our parents, and they from their parents, ad  infinitum. When people refer to having had a DNA test they are usually referring to atDNA.

My DNA test on Ancestry.com indicates 56,047 Golden paternal-line matches with other tested individuals. Am tested and share DNA tests on six other testing services.

I have access to Ancestry test results for multiple descendants from the Isaac, Nathaniel and Samuel Golden lines of 1780s Newberry, South Carolina.

~~~ The DNA test results of several tested individuals below include several contributors from a generation born before myself (1956), born 1924-1932. Each generation loses approximately 50% of the information contained within their atDNA. These earlier DNA test sets provide some important amplifying ancestral information since the cM size of their matches are larger [3] Add info about why cM size matters . These DNA tests carry info about our ancestors back before the 1700s.

~~~ If you have taken a DNA test and are willing to share your test results by letting me search that would be greatly appreciated and helpful. [4]Ancestry.com makes it easy to share DNA test results. The other testing websites would require your willingness to share your login and password. I can be reached at Bill Golden, Norfolk1956@gmail.com atDNA does not inherit evenly or uniformly across descendant lines. Some distant ancestors are easily identified in test results. Some lines can show no relationship in as little as three generations — this is usually due to one or more grandparents being different among tested descendants. [5]The Nathaniel Green Golden line split in 1866 with children by two wives: Arzela Moore, 1825–1886, and Elizabeth Jane “Lizzie” Sosebee, 1848–1930, Using Ancestry. com, there is no DNA … Continue reading

The Challenge of Using atDNA

Due to a breakthrough in DNA identification technology on Ancestry in mid-2022, we can now know whether a match is a maternal line, paternal line or the tested individual shares ancestry with both parents.

This lineal identification technology has helped immensely in helping to decide which surnames are possible or probable ancestral kin.

Current state of the art is such that atDNA can accurately identify specific kinship going back four (4) generations. atDNA can be strongly indicative of descent going back eight (8) generations — difficult without a genealogy to probe, but can be done if there are enough related matches. There are also detectable useful DNA fragments reaching 10-12 generations in the past.

Sorting out matches can be a challenge

Sorting out our Golden direct-line ancestry before 1750 means sifting through and figuring out which of the 128 DNA-contributing grandparents are not relevant to determining descendancy from Thomas Golden (my 5th GGF) who settled at Newberry, South Carolina about 1760. [6]These ‘128’ grandparents would be the number of DNA lines that each of us carry in our DNA that also contains the DNA of Thomas Golden and whomever he was married to and was our … Continue reading

What Our DNA Indicates About Our Ancestry

Each living Golden will have a different ethnic blend of grandparents reaching back to Thomas Golden who settled at Newberry, South Carolina about 1760.

Endogamy: Per the ISOGG Wiki,  “Endogamy is the practice of marrying within the same ethnic, cultural, social, religious or tribal group. In endogamous populations everyone will descend from the same small gene pool. People will be related to each other in a recent genealogical timeframe on multiple ancestral pathways and the same ancestors will, therefore, appear in many different places on their pedigree chart. … The interpretation of DNA results from endogamous populations can be particularly challenging because such people will typically have large numbers of matches in the DNA databases. [7] International Society of Genetic Genealogy (ISOGG) Wiki, 2023 … https://isogg.org/wiki/Endogamy

Goldens born before 1970 are endogamous in our DNA.

The great majority of our common Grandfather Thomas Golden‘s descendants live in the American South. Our shared Southern ancestry is heavily influenced by being overwhelmingly of Anglo-Saxon Germanic origin, whether from the UK, Scandinavia or from the BENELUX and modern Germany areas. Our ethnicity since 1750 is primarily of UK origin.

Foreign non-Anglo Saxon, non-United Kingdom immigration to the American South largely ended about the time Thomas Golden settled at Newberry circa 1760. Much of the earlier DNA from our continental Europe grandparents can still be detected at the 8th generation level, but rarely makes up more than 3-5% of the ethnicity that appears in our atDNA results. [8]This is a bit of a complex discussion that I will pursue more in the future. My statement sounds like an over-generalization. It is to some degree. However: math! Inherited atDNA loses half of its … Continue reading

On the other hand, male Golden atDNA shows a strong inheritance of ethnicity that matches our male-line origins in our yDNA: We are of Germanic R1b U106 DF98 male lineage — see Our yDNA Genetic History for more info. This Germanic lineage includes settlement of much of the UK, to include Ireland, Denmark and Scandinavia. Due to the presence of SNPs, we can differentiate between the different Germanic branches which appear in our ethnicity admixture.

Admixture is the blending of ethnicity that can be detected in our DNA.

Admixture is not where you are from per se, but what your genetic family is comprised of — your genetic tribe as it were. Ancestry.com’s 2022 update of its charts took quite a few people by surprise because many lost much of their Irishness and suddenly became Scottish, some Welsh and some Scandinavian (usually Norwegian).

~~~ History matters. The history of Ireland and most of the current United Kingdom (England, Northern Ireland, Scotland and Wales) has been a drama of repeating population displacement and reestablishment of generally new residents by a  new homogenous group. In the case of our Golden family, very few of our Irish ancestors were of actual Irish origin, just residence in territory that was located in Ireland. See History of Ulster Plantation for more background info. [9]Queen Elizabeth I defeated Gaelic chieftains in 1601 in the area that we call Northern Ireland today, centered around the city and county of Ulster.  Having displaced the Irish chieftains, Queen … Continue reading

Our atDNA carries an incredible amount of information which reaches back thousands of years. It contains SNPs which do not change over time and it contains chromosomal fragments which become of limited value in as little as four generations. Chromosomal fragments are not inherited equally, not even fraternal twins. [10]Identical twins have the same DNA and share 100 percent of the same DNA with each other. For an excellent article on how DNA gets inherited and its impact on ethnicity, see Do Siblings Have the Same … Continue reading Some ethnicity fragments are more persistent over time and some can disappear completely with a child’s birth.

Since atDNA is not inherited equally then each DNA testing company establishes a formula. Ancestry tries but does a horrible job of describing how its model works. [11]Ancestry explanation of admixture as of 2022.12.26: https://www.ancestry.com/cs/dna-help/ethnicity/expectations For Golden males that carry male-line SNPs that are inherited unchanged from generation-to-generation, your admixture will look different than our kindred female Golden descendants.

For our analysis, I am using only Ancestry.com ethnicity admixture (late 2022 model). For purpose of having a working concept to focus on and to compare within your genealogies, for both women and men, consider that your Ancestry admixture should be generally reflextive of your chromosomal DNA since 1750.

23andMe as well as MyHeritage have had a chromosome painter and tracker function for several years now. This functionality also exists with GEDMatch and a variety of other smaller DNA testing services.

Ancestry.com introduced a beta version of this functionality in mid-2022.

What this lets you do: View chromosome by chromosome where your ethnicity comes from and what comes from which parent. Future use: Will let you compare DNA tests with other kiin and discover EXACTLY what fragments you inherited together from which parent and grandparent. Does take some work! Will discuss this more in the future.

Below is a chart showing my ethnicity (William Golden, b1956) as inherited by chromosome. 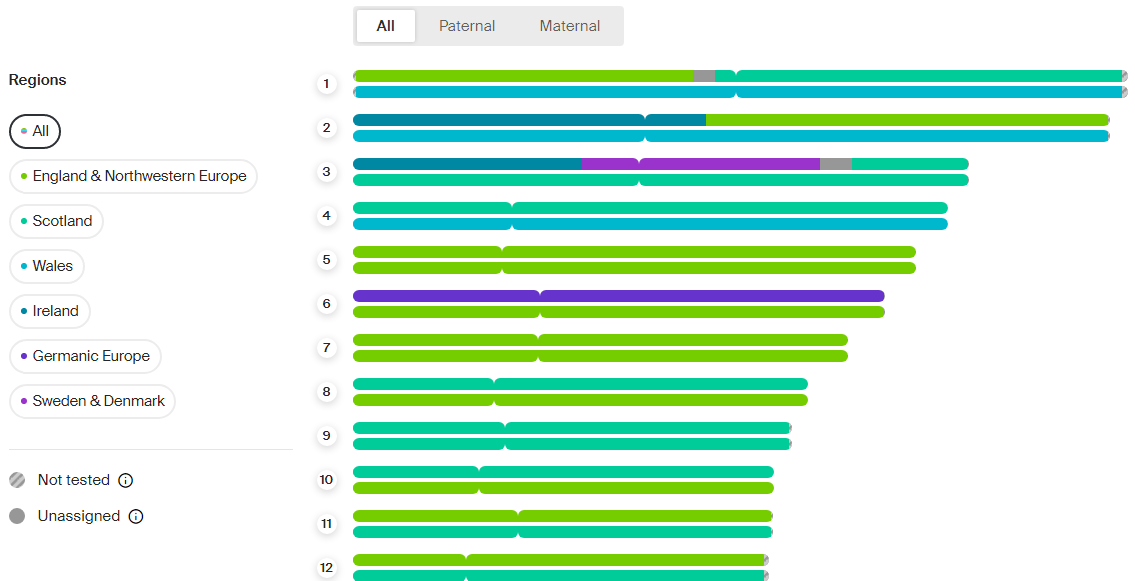 atDNA Can See Deep Into Past, But Not With Matching Details

There is a part of your atDNA that is not restricted by time: SNPs. Your DNA has hundreds of thousands of SNPs.

With time we learn that specific SNPs have both meaning and origin in time and place.

Chromosomal atDNA may be of limited value in helping us make genealogic matches, but can chart our travels through the past.

To make this relevant requires use of SNP-friendly tools such as mtDNA and yDNA testing.