DNA can tell a story.

This lineage tracks its origins back to the Bronze Age, approximately 3,500 years ago in what is now the Caucasus region of Russia, near to the Black Sea. Over the next thousand years our family would find itself living along the Baltic Sea coast, probably near what is today Estonia, Latvia and Lithuania.

U106/S21 is synonymous with being proto-Germanic. Many members of this group would later eventually become Germanic tribes. The most common of these tribes that are most commonly known are the Anglo-Saxons (Angles and Sachsen / Saxon; Angle would morph to AEngle and someone that is that -ish is Anglish / English).

What little written history, created by our ancestors before 700-1100 CE was via the use of runes. Runes were used by Germanic people beginning about 150 CE prior to emergence of the written German language.

Expansion of the Roman Empire about 101 BCE brought extensive contact with the Germanic  Cimbri and Teutoni tribes that inhabited much of modern France and Germany. These are probably not our ancestors — our ancestors are believed to have followed the Baltic Sea coast as they migrated westward to Denmark, Norway/Sweden and then onward to the English Isles.

What this means for our Golden family: there should be no expectation of any written records existing, or ever having been created,  before 1100 CE with our history recorded, other than tribe (FGC20588 > R-FGC20581 > R-BY103979).

Best chances for a written history of our family best exists at some time after the Middle Ages ended in the 15th century. If we ever trace a pre-American origin back to the English Isles then we could get lucky and possibly find some mention between 1100-1600 CE. These would probably be some legal or census record, or passing mention by a local historian. For now, we are still trying to explain how our family appeared in South Carolina in the 1750s and 1770s.

2022 Newsflash! During the last year, two individuals that share our Grandfather R-BY103979 have come to light via Y700 testing. One is a Swedish family and the other is a German family from the far north of Germany (Oldenburg) that came to the USA about 1860. Their German line goes back to approximately 1760 — when we were already in the USA for 2-4 generations.

DNA Designators are our ‘Golden Family’

DNA designations (Grandfather R-BY103979) can be confusing in its use of letters and numbers which do not seem to progress nicely in some alpha-numeric order.

We do not know much about Z306s. Z306s live primarily in just a few areas of Europe (the UK, BENELUX, Normandy France, Norway/Sweden).

My belief is that Z306 (includes Z301-306) was the branch that migrated along the Baltic coast, settling in Norway and then along the English Channel and Atlantic regions before coming to the English Isles.

>> What makes us unique from other U106s is that we do not carry two SNPs: L48 and U198. These two SNPs appear to be indicative of Germanic tribes that spread across western Europe and then directly into the English Isles. These would be the Germanic tribes that the Romans knew well and named. They would later became the core of the Anglo-Saxons and the Franks (a German tribe centered in today’s Kaiserslautern, Germany area. They then spread across to what we know as Normandy today. Charlemagne (‘Karl’ to the Germans) was a Frank; this line came to dominate France through the Bourbon line).

Surnames — For those looking for kinfolk with the last name of Golden, or some such, while sifting through this DNA data, you will not find our family name recorded in this ancient history before 1100-1300 CE. We may not even have had a common family name (surname) until some time in the last 6-900 years.

The Vikings and the Scots used patronymic names as surnames through about 1585. An example of patronymics at work: William, son of David, becomes William Davidson … who then has a son named William who becomes William Williamson. There is also the issue of clan names, from which you could be born into or loyal to (a subject of the Clan of ___). A person could have several clan names and live life under either their clan name or their patronymic name.

Example: William Williamson belongs to the Davidson clan. He could be William Williamson or William Davidson depending upon the circumstance he was in. NOTE: There is a Clan Davidson. I used that just as an example of patronymics. We have no connection with them … not that I know of.

Bottom line: At some point we may find evidence of lineage for our Goldens that goes back to the Middle Ages. However, going back beyond the Middle Ages is just not likely. To know our family history beyond the Middle Ages, and into the past beyond that, means embracing that we are the grandchildren of R1b1a2a1a1c1a U106/R-Z306 … R-BY103979. Our families were tribe and clan

Our Golden Heritage as Z381 and Z156 Germanic People

It has been pointed out that a number of Germanic royal families were Z381 with long genealogies — but there is no evidence of our Goldens have a knowable family history before about 1750 … and there is no reason to suspect that our Goldens were ever anything than king of their own several rooms castle. … =^) … There is written record that a Viking family or tribe named Coldic allied with William the Conqueror in 1066 to take England. Whether true or not, DNA points to northern Scotland as our point of English Isles origin.

The short story is that our branch came about at a time when ‘proto-Germans’ were developing culturally and linguistically in Europe. The roots of the German language were in place about 3,000-3,500 years ago, and German was recognizable as a widely-used language by about 100 CE.

There were two major branches of the early Germanic people, those that inhabited much of the heartland of western Europe, and those that migrated across the Baltic region (northern coastal Germany, upper Denmark and Norway) — that is our branch.

Our Z381 forefather branch would come to dominate Teutonic and Frankish Germany. Today, a number of Germanic royal lines track back to the Z381 family.

At some point our particular branch of Z381 continued to migrate and to experience genetic evolution: Z156 > Z304 > Z306 and our current life as Z306.

What we know about these SNPs:

In all likelihood, our family migration was up through Denmark and into Norway and Sweden within a century or two around the time of Christ.  The center for this migration was probably the Oslo, Norway area — and from there eastward into modern Sweden and westward along the Norwegian coast. Norway was long under either Danish or Swedish domination, becoming an independent country just in 1905.

Framing our story: You could think of our lineage as being descendant from the Anglo-Saxon tribes that became Danish-Norwegian Vikings and then began migration into the English Isles at some time after the 5th century CE.

Our family story is very hazy as to how we got from Norway to the English Isles and then to the USA, and when.

There is no known suspected immigrant to the USA for our Golden family. Immigration was probably pre-1750. There were some notable immigration trends during this period. Based upon these trends, our Goldens probably resided in the USA for one or more generations before 1750. Our story started in the Indian territory of South Carolina (Ninety Six District) during the Revolutionary War. Chances are high that our immigration into South Carolina was from Virginia or Pennsylvania during the 1760s or 1770s. 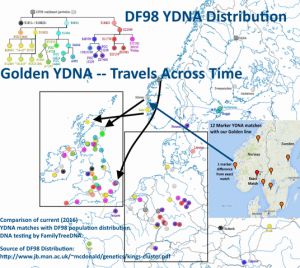 Even today our YDNA has anchors in Norway. The chart above shows current Norwegian and Swedish families that match our YDNA signature. The highest concentration of Z306 matches is in the Oslo, Norway area … which is also home to an exact match for our YDNA haplotype.

As you can see in the map below, there should be little doubt that our line made it to America by way of the English Isles — with the DNA evidence pointing to a Scottish origin — the Scottish match is the highest match at 25 and 37 markers, and is the only match at 67 markers (Keeling family)!

? Is our male Golden line Jewish? Part of a lost tribe of Israel? — a question that I get several times every year.

Some Biblical scholars (hereafter ‘Biblical Scholar theory’) have combined scripture, history and DNA research with some being of the opinion that the Germanic people were descendants of the Assyrians. While that may sound far-fetched and really stress the timeline given in the Bible for when the Assyrians existed (2500-530 BCE), the theory does make for an interesting read. There are similarities in this theory and what geneticists tell us about our evolution.

I am including this just to provide a larger perspective, not that I believe this account to be accurate.

There are some major discrepancies:

Again, this makes for interesting reading. I do believe that there are hints at our past to be gleaned. What got passed down to us as stories and finally recorded generations or many generations later often has important tidbits of information that point you in the right direction.

Just an example of following hints: When researching my mother’s family’s arrival in America, which is no mystery now, the family lore was that three brothers came to America via Jamestown, Virginia. That is all they knew. It stayed that way for generations.

In 1986 while researching landgrants at the Mormon LDS genealogy library in Bethesda, Maryland, I discovered the original landgrant to Thomas Norfleet from October 1666. Thomas came to Jamestown from Norfleet, England just outside of London. Thomas had three sons and those were the ‘three brothers’ that future generations remembered … ever so vaguely.

BTW, I got a chance to go to Norfleet, England in 2004. About the only thing that exists from when my family lived there is the old St Botoloph’s church. Norfleet is today a suburb of Gravesend, Kent, England.

As for my Goldens, Goldens can be stubborn people. They are not making themselves findable very easy — interesting, but not easy … =^)

You are welcome to add to or to correct this story by contacting: Bill Golden, Norfolk1956@gmail.com

BTW – I look forward to sharing your stories, photos and in-search-of quests. Contact me at the email address above.