— There was another ‘J. M. Gouldin’ born in Virginia in 1838. His fullname and place of birth is unknown. He is listed in the 1910 census living at Dover, Lafayette, Missouri.

Parents: Unconfirmed; may have been orphaned just after age 10.

DNA: Male Gouldins are yDNA tested. They are a match with the Goldings that settled in Gloucester, Virginia about 1649. There is virtually no genealogy of the Gouldins before early 1800s, although their kindred Golding line in Virginia is well documented. It would appear that the Gouldins may descend from the Richard Griffin Golding line of King George County which would become Gouldins in the Westmoreland County area.

Grandparents: There was an earlier John Milton Gouldin, born about 1765 (died c1816), at Caroline County, and married to Elizabeth Wright, also believed to have been born about 1765. Little is known about either. A single genealogy lists the parents for both, but I cannot confirm the accuracy of parentage:

At VMI, John Milton studied medicine, and would become and serve as a doctor until his death. When the Civil War broke out, he raised a company of troops in 1861 and was ‘elected’ a captain in the ‘Sparta Grays’ … Sparta, Bowling Green being his home in Caroline County.

The Sparta Grays were Company H of the 30th Virginia Infantry Regiment. John Milton Gouldin would finish the war as a Lieutenant Colonel.

NOTE / FACTOID: Active from the mid-1840s onward was the ‘Sparta Clay Club’ in Sparta, Bowling Green, Caroline County, Virginia. Gouldins, Wrights and Broaddus and many other family members were very active in this political debate club and supporters of Henry Clay for public office. See end of this article for names. Numerous members of the Sparta Clay Club, or their sons, would serve in the Sparta Grays, Company H, 30th Virginia Infantry.

Wounded several times, to include at Cold Harbor, 1864, LTC Gouldin was at Appomattox Courthouse with Lee on the day of surrender. A handreceipt shows that he was allowed to return home with two horses, some blankets and clothes. 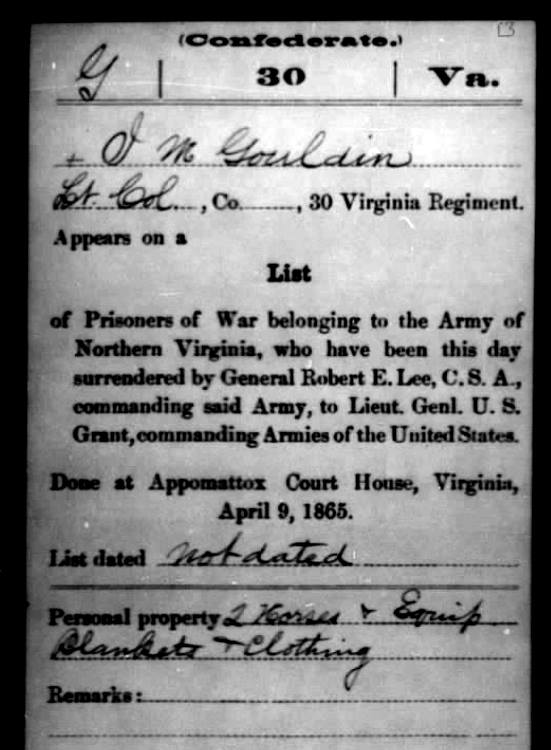 It appears that John Milton lived both in Kanawha County, WV and maintained his home in Caroline County. He passed away in 1878 while in West Virginia. His body was returned home for burial and his probate was handled in Caroline County.

There was one child born to the short marriage: John Milton Gouldin, Jr., born 1878.

John Milton Gouldin Jr. (1878–1956) was born at “Springfield”, the family farm near Rexburg, Essex County, Virginia (near the intersection of Fernlea Road and Mt. Landing Road west of Rexburg) and would become a doctor of great note in the region, very active in both government and civil affairs. He would pass away 10 September 1956. There is much more to this story but will save for another day.

From what sounds like a family reunion of families intermarried with Caroline Gouldins going both backward and forward for several generations from 1844, an excerpt from The Richmond Whig Friday, Mar 15, 1844, of Richmond, VA Vol: 24 Issue: 22 Page: 1: 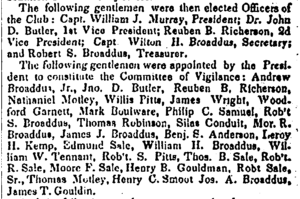 You are welcome to add to or to correct this story by contacting: Bill Golden, Norfolk1956@gmail.com

BTW – I look forward to sharing your stories, photos and in-search-of quests. Contact me at the email address above.