Thomas Golding (b1857) of Old Shelf Cottages, Lenham, Kent, England and the German ME-110 that killed a cow

>> Thank you to Ally Dowd for sharing this memory and story.

During the Battle of Britain, in 1940, a German Messerschmidt ME-110 aircraft was shot down and made a perfect pancake landing at Old Shelve Farm. The plane killed a cow. An eyewitness account from a man called Stan Froud who was a little boy on the neighbouring farm said:

“Old Shelve Farm was the neighboring farm where I went every morning in the war years to get milk. I lived at Cobham Farm next door, and my parents leased the fruit on Old Shelve farm.

My mother and father were picking plums when the ME110 crash landed in the next field. They had descended their ladders to watch the plane crash, and when it came to a halt half a block from the edge of the plum orchard, its guns were pointing in my parents direction My mother related how they skedaddled back up their ladders to get above the range of gun fire.

Also, the RAF dismantled the ME110. The plane was virtually intact, and the RAF carted it away. I spent summer afternoons watching them dismantle it.” 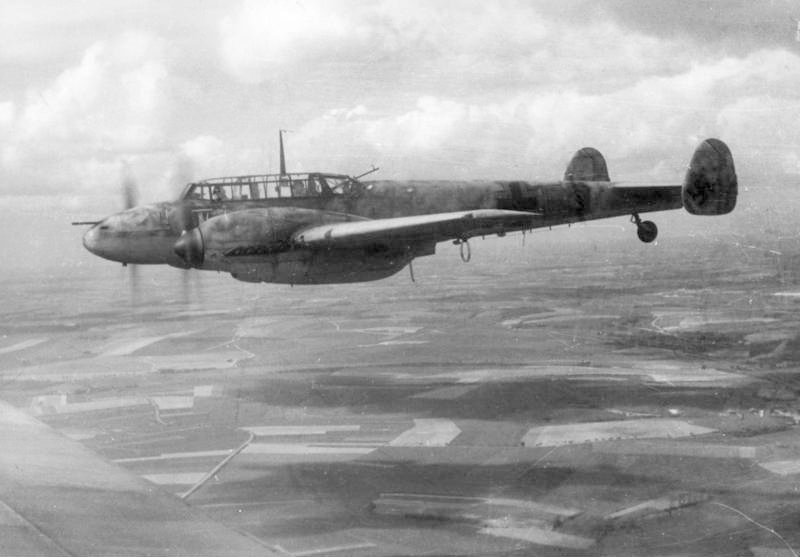 Lenham is a market village in Kent situated on the southern edge of the North Downs, halfway between Maidstone and Ashford. The picturesque square in the village has two public houses (one of which is a hotel), a couple of restaurants, and a tea-room. Lenham has a population of 2,197 according to the 2011 Census.