Green Golding (Golden) is appointed in 1821 as a Commissioner of Roads, Bridges and Ferries in the Parish of Saint Bartholomew, South Carolina. 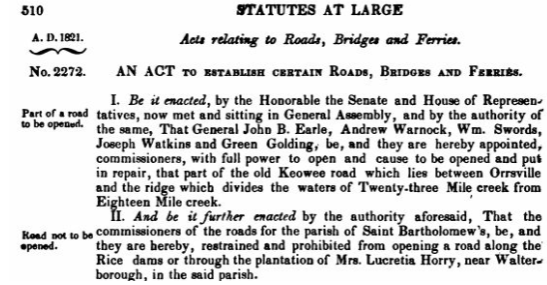 Source: Page 510 of The Statutes at Large of South Carolina: Containing the acts relating to roads, bridges and ferries, with an appendix, containing the militia acts prior to 1794. 1 p.l., xv, 780 p

Thanks to Carole Alessi for finding this obscure reference to Green Golding. It has long been thought that there was a Green Golding or Golden living in South Carolina during the late 18th century. It would be nice to know much more about this Green Golding – if you have info please contact Bill Golden at Norfolk1956@gmail.com

AN ACT to establish certain Roads, Bridges and Ferries.

I. Be it enacted, by the Honorable the Senate and House of Representatives, now met and sitting in General Assembly, and by the authority of the same, That General John B. Earle, Andrew Warnock, Wm. Swords, Joseph Watkins and Green Golding, be, and they are hereby appointed, commissioners, with full power to open and cause to be opened and put in repair, that part of the old Keowee road which lies between Orrsville and the ridge which divides the waters of Twenty-three Mile creek from Eighteen Mile creek.

II. And be it further enacted by the authority aforesaid, That the commissioners of the roads for the parish of Saint Bartholomew’s, be, and they are hereby, restrained and prohibited from opening a road along the Rice dams or through the plantation of Mrs. Lucretia Horry, near Waltersborough, in the mid parish.