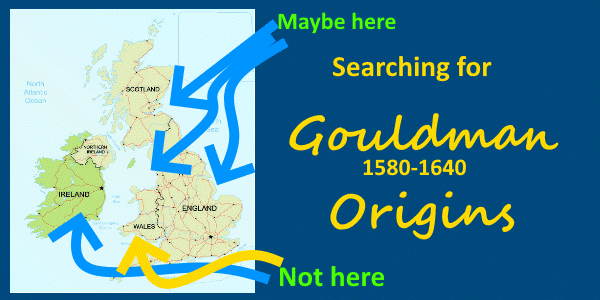 Gouldman is not a common name. Even today, the name is very rare in the UK and Ireland. Per census records, the Gouldman name exists today in just four counties.

For the Virginia Gouldmans to have an original immigrant from the UK or Ireland, then the preceding two generations of Gouldmans would have been born between 1580 and 1640.

>> There are no records for any Gouldman, or similar spelling, having immigrated or arrived in the Chesapeake region or Massachusetts or New York before 1700. The earliest arrival in Gloucester, Virginia had settlement from Massachusetts — Richard Ripley brought with him John William Golding, approximate age 10-11.

Thomas and Elizabeth Bradford Golde lived in Sussex, England their entire lives. They did have a son named Thomas, born 8 September 1646 at Brighton, Sussex, England — not at Wokingham in Berkshire.

A 1646 birth is  too late for Thomas Gouldman of Virginia to be able to acquire land (age 21+): Thomas began Virginia land acquisition in 1664; if born in 1646 he would have been only age 18 — too young to enter into any contractual agreement (age 21).

… and certainly a 1646 birth date is too late for Thomas to have built up the capital essential to paying the transportation, housing and resettlement of people to Virginia in 1664 — when he would have been only age 18, if born in 1646. Thomas Gouldman had significant wealth to prepay the voyages and to transport dozens of new Virginians from England.

>> Four genealogies on Ancestry show Thomas and Elizabeth Bradford Golde as parents of Thomas Gouldman of Virginia. No sources for this information are provided.

The Thomas Golde (Gold) born very late 1638 in Berkshire, England was christened on 15 Jan 1639 at Wantage, Berkshire. His parents were Thomas Gold and Anne LNU. Wantage is approximately 20 miles from Wokingham. This Thomas married Margaret Webb in 1664 … the same year Thomas Gouldman was in Virginia registering a land purchase at Essex, Virginia. He had siblings: Anne (1637), Edyth (1647), Elizabeth (1650), Martin (1641), Robert (1643). Thomas and all of his Gold/Golde siblings have christening records with specific dates for Wantage, Berkshire. Can find no record for a Thomas Golde born at Wokingham. 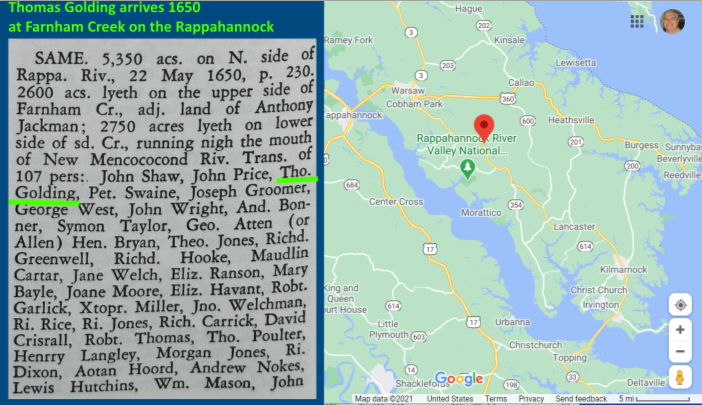 1650 May 22 — 107 persons were transported to the Farnham Creek area and settled on 2750 acres on the lower (southern) side of Farnham Creek.

Among these arrivals was Thomas Golding.

Gouldmans … if there was ever a ‘most likely candidate’ for the original immigrant family, it would be ‘Thomas Golding‘ who was ‘transported’ … not ‘imported’ in 1650. The first appearance of the Gouldman name in this area was 1664 (?).

The first known Gouldman that appears in any documentation is Thomas Gouldman, (c1640-1684) settling in the Occupacia Creek area of modern Essex County, Virginia.

Use of ‘man’ at the end of a name indicates a patronymic or locational name (such as Thomas of Golding, many Jewish Goldings got their name this way). As a patronymic (son of …) -man is the same as -en -er -in -ing … our ancestors would have been flexible in their use of such name endings. It all meant the same to them and to the ear was often indistinguishable (-er popular among Dutch origin).

>> There is no known yDNA test for a Virginia-origin Gouldman. Gouldmans may be related to Golden (Goulden) and Keelings which share 67 marker yDNA matches. We have 220+ yDNA data sets for Gold/Gould/en,er,en,ing to compare against.

>>> There is no known genealogy for anyone claiming descent from Thomas Golding of the 1650 Farnham Creek area settlement. He’s available for adoption!