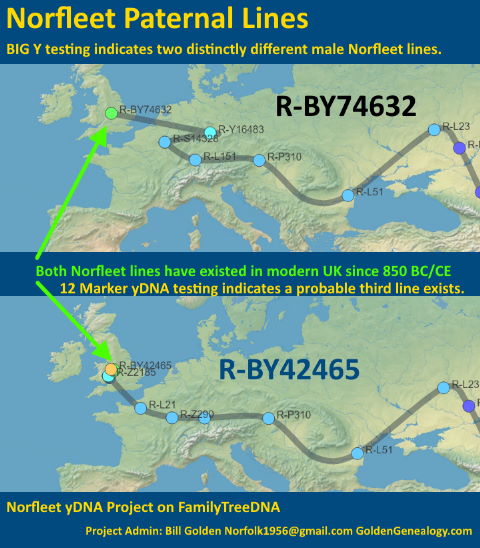 When Thomas Northfleet arrived in Virginia is unknown. It is believed he came from Molash, Kent, England or what was Northfleet by Southfleet, southeast of London.

Norfleet yDNA … The Norfleet name appears to have gone extinct in the UK over a century ago. A general assumption is that Thomas Norfleet of 1666 was the sole immigrant to North America that used the surname Northfleet which became Norfleet.

yDNA testing using advanced SNP analysis indicates living male Norfleets come from at least two lineages which split some 4000 years ago — so they may have the surname in common but their lineage is not.

NOTE: I am aware of one living UK person and family going by the name of Norfleet. They are not known to be yDNA-tested and they have not shared a genealogy. Will try to learn more.