We continue to bring together different pieces of our family tree. Not always is there documentation. Not always do dates and names in genealogies agree — and with no sources of actual information to support appearance of people within genealogies: we must remain flexible in interpreting their presence within a genealogy.

There is no known documentation of any kind that can show the Shands family of Alexander Shands, wife Helen Baxter or daughter Elizabeth Shands existed.

Elizabeth Shand‘s birth and death dates shown in genealogies claim that she died 8 February 1773 at age 107. This is a very specific date and place, yet her name and that date appears to exist in no known record. In the probate of husband William Rainey on 10 July 1722, Elizabeth ‘as wife’ is not mentioned.  Elizabeth as a daughter is listed.

>> I fully accept existence of the Shands. Any details about them are unconfirmed and may be unfactual. I have my own mystery family member, Barbara Goulden (c1720-1794), also married to a related John Henry Raines. Cannot find a single reference to her anywhere except in a 1942 DAR Application.

The life of husband William Raines, aka William Thomas Rainey, and most of their children are almost as undocumented — some documentation does exist on the Raines/Rainey children’s spouses.

yDNA testing on the Raines family in the Rappahanock area (see graphic) shows that males from this family went by both the name Raines and Rainey and exactly match one another in yDNA.

William Rainey’s last will and testament was probate in Prince George County, Virginia on 10 July 1722. Wife Elizabeth is not mentioned and the estate is parcelled out to his named children: 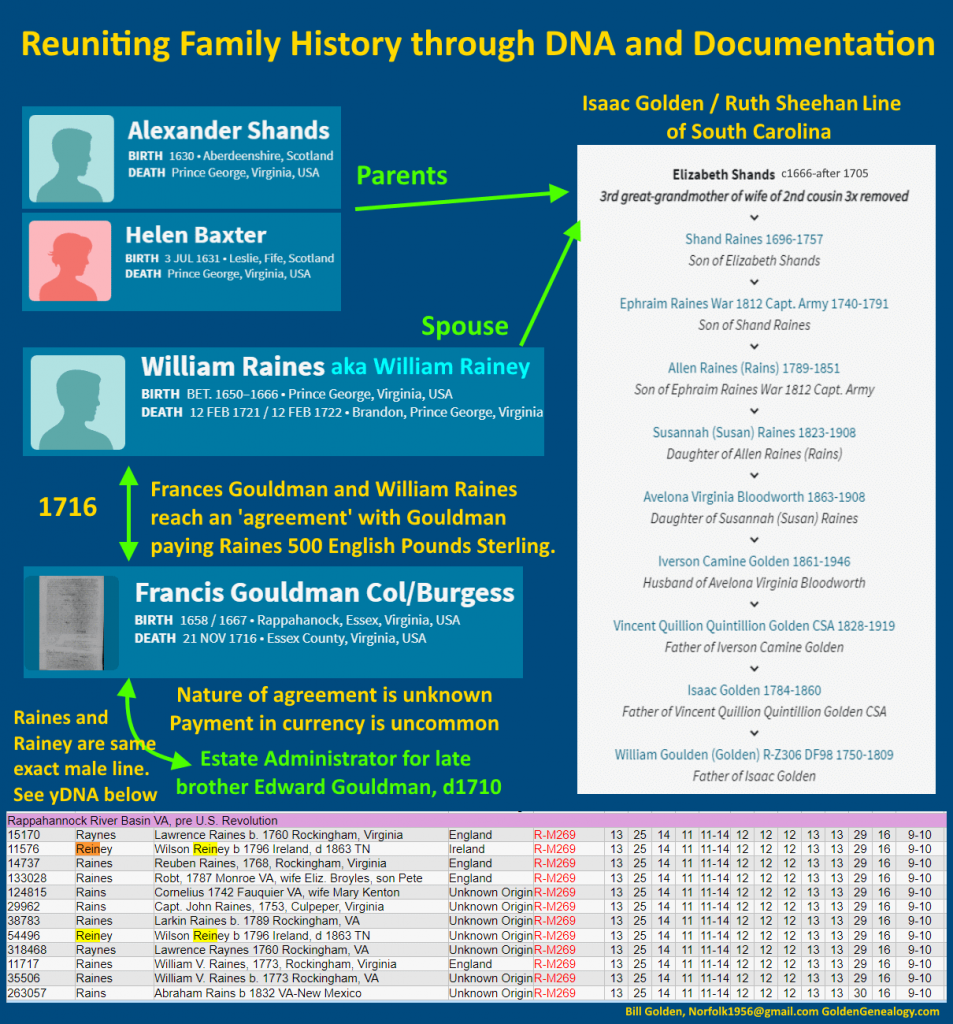 Last Will and Testament of William Rainey

Probate: 1722, July 10. Will. Will of Wm. Rainey in Prince George Co. Will lists sons John, Roger, William and Richard; daughters Susannah, Sarah, Elizabeth, and Rebecca Lish (or Dish). … “land to son John Ranye, but if John has no heirs it is then to go to son Roger Ranye. He also leaves following:  Susannah, various items; William, various items; Elizabeth, var. items; Roger two cows; Sarah great iron pot; Rebecca var. items; Richard 3 ells of Oznabriggs; rest to be divided between Roger, John, Rebecca and Susanna, who is to have 1st choice.”

See an Index of Rainey Family Information at this link. The index does a very good job of collecting information on variations of the name Rainey, but seems unaware of any relationship to Rains or Raines. Since yDNA testing clearly indicates the families are the same exact male line then we have a bit of a tangled web to investigate.

Rainey yDNA has been well tested when it comes to numbers.

— With exception to one Rains family member tested, there is no presence of Rains or Raines.

— Participation of yDNA test-takers is via self-selection. Rains and Raines family members may not have considered joining the Rainey/Raney DNA Project.

— At some future time I will try to correlate the different yDNA test projects to see if I can backtrack on some additional of the Raines and Rainey descendants as being male-line kin.

It is indeed a tangled web. Raines descendant Jeff Carr made a concerted effort to use historical documentation to clarify and to verify different branches of the Rains and Raines family through the current generation.

Jeff’s Raines Family History research acknowledges some level of possible kinship with the Rainey family but does not really explore that possibility. A position is taken that by the late 1700s the family lines were clearly distinguishable from one another for genealogy purposes. DNA research was not explored at any great depth.

Raines family research very specifically did not delve into the yDNA evidence, which is regrettable since yDNA testing clearly indicates Raines and Rainey are the same male line coming out of Old Rappahanock County, Virginia, prior to 1700.

Rains, Raines and even Rainey yDNA have been tested at significant high rates by surname descendants.

—— Some Rainey male line descendants clearly align with an Old Rappahanock County, Virginia line of Rains and Raines. I will endeavor to add those within the yDNA tests to my Ancestry tree and see what correlations I can make.

—— No Rainey to be found here. This may be solely due to self-selection as ‘my name is Rainey not Raines’.