The following is mostly fact and part theory. I have tried to clearly delineate between the two. This is an article in active research.
Have discovered a number of relevant legal documents in the Essex County archives … access will depend upon COVID-19 cooperating so that I can either go look or  find detailed indexes so I can request certain documents.
A mystery in our DNA is close association with the Rains family. Numerous Rains family genealogies claim a very specific marriage of their family with Barbara Goulden, supposedly born circa 1720 in Virginia. No evidence exists for that date. No evidence exists for Barbara Goulden’s existence … although DNA indicates that someone from our family line interacted in a way that transferred DNA to Rains’ descendants which leads back to us Goldens (Gouldens).
It should also be noted, that the Raines family had a continuing relationship with branches of our family for some 100+ years later, will into the 1800s.

Did Our Goulden Surname Come Out of these Lawsuits?

A mystery in our DNA is close association with the Rains family.

Research Needed: When Martha Tomlin Gouldman Winston passed away c1721, her husband presented her will to the Essex County Court in 1722. What was in that will? Have not seen previous reference to it. Essex legal records are known to be in good order. Must go find.

Numerous Rains family genealogies claim a very specific marriage of their family with Barbara Goulden, supposedly born circa 1720 in Virginia. No evidence exists for that date. No evidence exists for Barbara Goulden‘s existence … although DNA indicates that someone from our family line interacted in a way that transferred DNA to Rains’ descendants which leads back to us Goldens (Gouldens).
NOTE: Cleve Weathers is a Rains descendant and has done some decades of research on the family. He once did a statistical analysis on the probability of someone being named ‘Barbara’ in colonial Virginia. Prediction: almost no chance of Barbara being used as a name, although it was known to exist.
Likewise, the name ‘Goulden’ and ‘Golden’ are virtually unknown in 1600s and early 1700s Virginia. To make claim to being kin of someone born in Essex County, Virginia in 1720 and their name to be ‘Barbara Goulden‘ requires either inventing an unlikely name or acknowledging that perhaps such a person did exist.

>>> There were Gouldins in Virginia, although they probably came by that name in the mid-1750s. Gouldins still live in Virginia’s Northern Neck and still lived in Caroline and Essex County until 1942. Gouldins known to me that have done genealogy research make no claim to knowing their line’s origin beyond c1800.

Displaced in 1942 by the US Army taking/buying land to create Fort A. P. Hill, the Gouldins dispersed, along with Gouldings and Rains family members still living in the Rappahannock Academy area. >>> I have yDNA-tested these Gouldins: not related, but they are directly yDNA related to the male line of William Golding (c1704-1782) and Elizabeth Foster (c1704-1775) family. The Gouldins probably descend from William’s brother Richard Golding who lived in the King George County, Virginia area.

Gouldman Historical Note: Barbara Gouldman was a name that occurred among English Gouldmans ~~~ although there are as few English Gouldmans in the general population as there are American Gouldmans.
Death creates strange situations. Dying at untimely moments with young children caught in the lurch all the more so.
William Raines sued the estate of Francis Gouldman in 1718. What for: IDK. Raines was due 500 pounds English currency per the 1716 Francis Gouldman estate records compiled by estate executor Thomas Waring.

On page 115 of the 1716 Colonel Francis Gouldman Estate Papers  compiled by Thomas Waring, it notes that William Raines is due 500 pounds as of Coll. Gouldman’s agreement. Other amounts due to other individuals are noted as ‘per obligation’ or ‘per judgement’. Am guessing that the later Raines lawsuits were to collect on this. In 1719, a judge ordered Thomas Waring to court with all of the estate records to give an account of them.

What was William Rains’ agreement with Francis Gouldman?

Our grandfather FNU Goulden (Gouldman) was born probably in mid-1710 … Edward Gouldman made his last will and testament in Nov 1709, proven in court in Jan 1710. He acknowledged in his will that his wife was pregnant — and we know that the child lived due to child support provided by Edward’s brother Francis Gouldman. It is unclear as to when Edward Gouldman‘s widow Martha Tomlin Gouldman married to William Winston, but was certainly married by 1714.
? But what was the pre-1716 William Rains interaction and agreement? Did the Rains family take in our grandfather as an indentured orphan? Mother Martha Tomlin Gouldman Winston died in 1721 or early 1722 leaving our grandfather orphaned at age 11-12 … but what if he were given up earlier?
By 1715 Francis Gouldman was ailing … Did Francis Gouldman try to take care of kin by arranging for the William Rains family to take in Gouldman’s nephew, our grandfather (born 1710) as an indenture?
>>> Virginia’s orphan laws operated as ‘indentures’ … a contract was written for care in exchange for something or cash bond similar to a trust.
Some Virginia genealogists have been most helpful in research the Gouldman-Rains connection. They have provided some very interesting links to indexes showing legal interaction between the families. Details of that interaction are buried in the Essex County legal archives, which thankfully seem to exist with almost no records loss over time.
Martha Tomlin Gouldman Winston had a will filed in Essex County, Virginia in 1722. Now to get a copy of that. … If no child mentioned, then the boy child (Edward Gouldman‘s third son, aka FNU Goulden) either died after 1716 (but that would not explain our line) OR Francis Gouldman may have arranged an indenture with the William Rains family until age 21 … indentures were legal documents, need to see if that still exists.
Somehow, learning more about FNU Goulden’s fate will also probably explain Barbara Goulden‘s parentage.

Clarification re 1718 Rains vs Estate of Francis Gouldman

In the legal lawsuit, William RAINS sued the estate of Francis GOULDMAN, which was being managed by Gouldman kin (Richard) Thomas Waring (1673-1754).
Waring was married to Elizabeth GOULDMAN (1698-1748). When Francis GOULDMAN died he left all to Elizabeth to be managed, to include the inheritances due per other inheritances regarding the death of Edward GOULDMAN, her nephew and our grandfather. Thomas Waring would later submit a substantial inventory of the estate on 13 Jul 1719 with acceptance by the court on 15 Sep 1719. Francis Gouldman’s estate valued at, or with debt of/paid out at 31444 (English pounds?) ~~~ it is unclear as to what 31444 actually indicates, there does not seem to be any math (+/-) recorded within the inventory itself.
? Does 31444 = outstanding debt or current estate value? 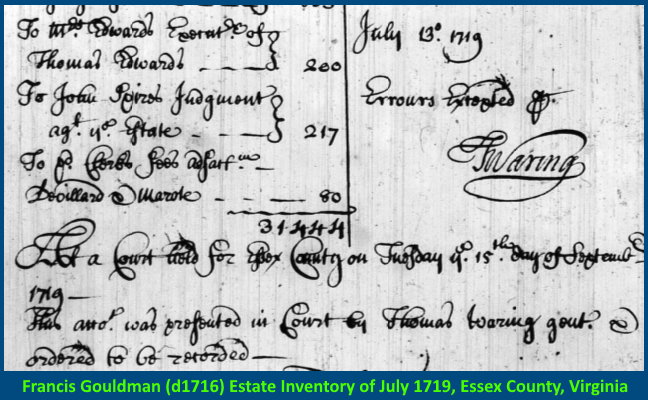 William WINSTON was whom Martha Tomlin GOULDMAN remarried to after Edward GOULDMAN died.
1725 — Martha Tomlin Gouldman Winston died either in late 1721 or early 1722, but a court proceeding of 1725 settled ownership with William WINSTON of the Gouldman plantation Mahockney, which by rights had come into the family through Martha’s inheritance.
>>> 1725 Legal Settlement of the Mahockney Plantation by Gouldman, Tomlin and Winston estates … although it appears that ownership would be contested for some decades to come.